Get well card with an image in an embossed frame 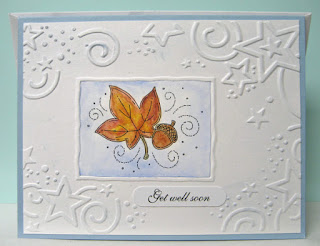 I combined a watercoloured image (Meljens Designs) with an embossed background almost seamlessly!!  I embossed the background and then the watercoloured image so that the frame would encompass the image.  I then trimmed the image along the inside of the embossed border and glued it into the debossed area inside the frame. To really incorporate it nicely I embossed the whole thing again!!  Worked perfectly to really sink the image into the frame though you have to be very careful to really put the embossed areas back into place properly or you get a bit of ghosting happening.  Love how it worked out.  I glued this large focal element to the front of a blue card and added a single punched greeting below the image.  Thought it needed a bit of something so I sponged a bit of blue ink over the embossing to give the whole thing a bit of unity.  Much better!!!
Will have to see about using this technique with some of my other embossing folders which have frames in them.   If you give it a try, let me know!!

Therese
Posted by Therese at 10:37 am No comments: