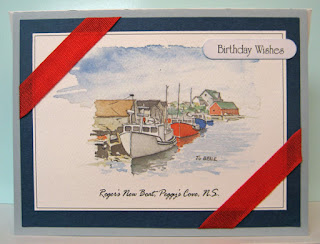 I was going through a box of card fronts that my sister gave me a few weeks ago and decided to reuse some of the images from them to create focal elements for new cards.
For this first one, I cut out the main element on the card front and trimmed it very close to the small line frame.  I mounted it to a piece of dark blue cardstock and added red vintage seam binding to two opposite corners.  I mounted this element to a light blue card front.  I added a sponged laser printed punchie greeting (SU Word Window) on the upper right  using double sided tape. 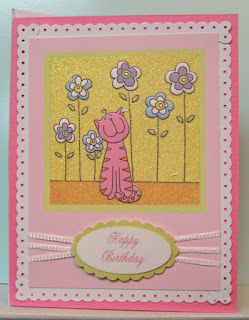 For my next card, I trimmed the pink cardstock around the cat image even on three sides leaving a larger section on the bottom.   I added a length of white fiber below the image wrapping it around several times and securing the ends to the middle with double sided tape.  I sponged the edges of an oval greeting punchie  (SU) with green and then layered it onto a green scallop oval (SU) which I punched from some junk mail.  I adhered it below the cat image and over the white fiber using 3D foam tape.  I punched four pieces of white cardstock using the ribbon border punch (SU).  I mounted double sided tape on all four sides on the back of my cat element and adhered the ribbon border to the back of the image leaving about half showing.  I trimmed the ends with scalloped decorative scissors which very closely simulated the scallops on the ribbon border.  Really like how that turned out!!  I mounted this large element to a pink card front. 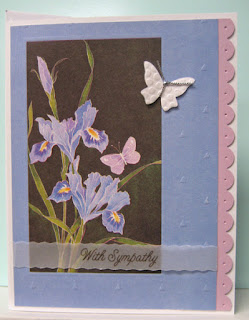 For this card, I trimmed around the iris image leaving about the same amount of blue border on the top and left, more on the bottom and even more on the right.  I added a trimmed vellum greeting, folded the ends to the back and secured them with regular tape.  I added a scalloped border (SU) in purple on the right hand side and pierced all the scallops with a push pin.  I mounted this element to the front of a white card.  Finding that it still needed a bit of something I rummaged around in my little stash of butterfly punchies and found this little white embossed one which I thought would do very nicely as a 3D embellishment.  I tied a silver cord around the body section, tied a double knot and then trimmed the ends a bit long which created body and antennae for my little butterfly.  I mounted it to my card front using a small piece of double sided adhesive.
I am happy with my new cards with reused elements!!

Therese
Posted by Therese at 8:30 pm No comments: 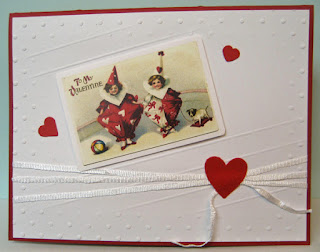 Another few Valentine's cards.  These ones feature colour printed vintage images from Sweetly Scrapped.   The first one features a couple of very cute clowns.  I laser printed them, trimmed around the edges and rounded the corners. I custom embossed a white layer using my chipboard embossing tool and some custom lines that I added using my scoring tool.  I positioned the image on the back to help ensure that the space I left between the lines would accommodate my image.  I adhered my image with 3D foam tape and then added a length of white fiber before gluing this whole element to the front of a red card.  I dug through my heart punchies stash and found these three little hearts that accented my card perfectly!!  Love it!! 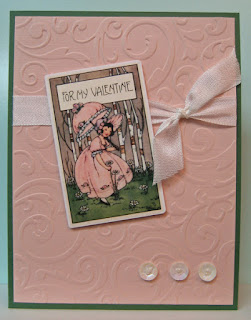 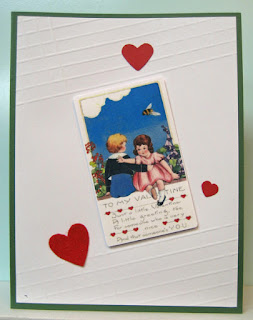 My second card features a cute little girl with an umbrella in a forest of birch trees.  I laser printed the image, trimmed around it then rounded the corners by hand. I embossed a peach piece of cardstock with this beautiful delicate flourish then added a length of white vintage seam binding.  I adhered my image using 3D foam tape positioning it over the seam binding.  I glued the whole element to the front of a green card.  After tying on a short piece of seam binding to the length I already had, it still needed a bit of something so I went looking for some options.  I found these ivory/pink sequins which worked perfectly!  I adhered them to the front of my card using glue dots and then added little dots of iridescent glitter glue in the centers.  Really happy with how it all worked out!!   My third card is very similar to my first one - vintage image with rounded corners added to a white custom embossed layer embellished with three little heart punchies!!  The images already have enough message that these cards really did not need any additional greetings!!

Therese
Posted by Therese at 6:06 pm No comments: