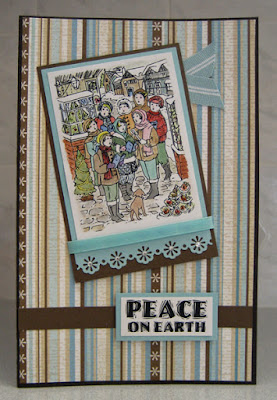 On this large card I used decorative paper featuring stripes on a dark brown card front.  I added a thin strip of brown cardstock  and a layered greeting over it.  I watercoloured the carolers image (CLKER), layered it over a larger blue layer which I punched across the bottom using the Daisy border punch (MS) and then onto a large yet brown layer.  I added a folded ribbon flag on the right hand side using double sided tape and a short piece of satin ribbon just below the coloured image tucking the ends to the back and securing with double sided tape. I adhered this large element to my card front just above my greeting using 3D foam tape.  Thinking it needed just a bit of something I added some small self adhesive rhinestones to the center of the snowflakes punched out of the blue layer.  That was better!!  It did take quite a while to watercolour this image because it has so much detail and I wanted to make sure I incorporated some of the colours featured in the other parts of the card.  It worked out well.

Therese
Posted by Therese at 9:05 pm No comments: