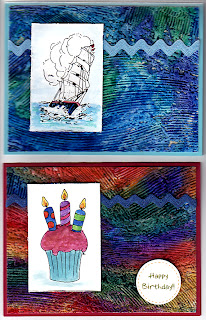 I just love the vibrant colours of wax crayon backgrounds!!  Here I used wax crayons over textured wallpaper!!  Check out this post for more information!!  It was a total blast to create these backgrounds and still more fun to choose images that would work well with them.  The sailing ship is a digital image from CLKER and the cupcake is from Beccy`s Place.  I wanted to keep the design simple to let the background shine so I simply added a length of rick rack and the coloured image.  You can see the versatility of this medium - the top one makes a great masculine card and the bottom one with its circle greeting makes the cutest kids card.
I found this greeting in my greetings stash - applesauce containers that stack and store extra greetings by subject - birthday, thanks, etc.   I bring them to class so participants can customize their cards.
I hope you will be inspired to create some backgrounds!! Make a few extra while you are at it and you will have what you need when you need a card in a hurry!!

Therese
Posted by Therese at 9:27 am No comments: 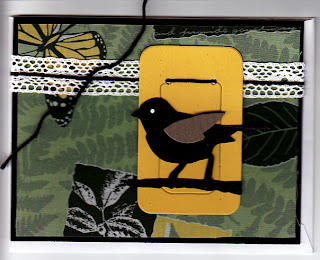 The decorative background on this card is sticky backed fabric which was designed for use in home decor.  I have had it for a couple of years and have several times tried to incorporate it into my creations without success.  This week it all just gelled and I created this design!!  Because the fabric is sticky backed it is best to apply it like a large label.  I peeled back just a small amount of the backing paper and positioned the top onto my card front ensuring it was straight and true.  Once that little piece is properly positioned I was able to remove the backer paper easily off the rest of it and the whole piece settled nicely into place.  Love the look of it!!  I added a length of lace, tied some black cording around the card front over the lace and slipped the cardstock paper clip (SX) over it sliding it along until I was happy with the placement then anchored it with 3D foam tape.  Glued the little bird (TH) to the paper clip and added it the wing with 3D foam tape. Used a white gel pen to add an eye.  Stamped some script with grey Memories ink onto the fabric to add a bit of texture as some areas needed a bit of a boost.
Use what you have!!  I know it is good advice but I can totally relate when in an effort to use what you have you seem to be hitting a road block and nothing is working!!  I admit to moving on and trying something else because forcing the design process tends to be not an effective use of time for me, though having said that I am trying more and more to use what I have in an effort to reduce the stash!!

Therese
Posted by Therese at 9:01 am No comments: 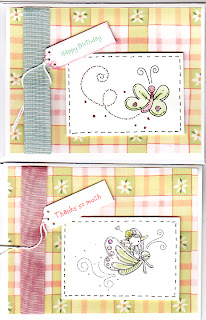 This card was inspired by my sister's border punch tags blog post! How cool that you can use a border punch to create cool little tags!!  I used the eyelet border punch (SU) which makes tags that are five eighths of an inch wide.  You can make them as long as you like.  Follow the link above to check out her tutorial.
I created the greetings in my layout program and printed them before I punched the edge and cut them apart.  Very cool!!
The images were downloaded from Meljen`s blog.  She has a lot of beautiful whimsical images on her site!!  I added some nice floral decorative paper and some coordinating ribbon to finish off my card.  I watercoloured the images and added some stitching lines with a Sharpie marker.  Coloured the tag too,tied it to the ribbon and positioned it with 3D foam tape.
Try making your own little tags!!  Love being able to use a tool I own for more than one purpose!!

Therese
Posted by Therese at 8:36 am No comments:

Cardmaking - February - with a Twist 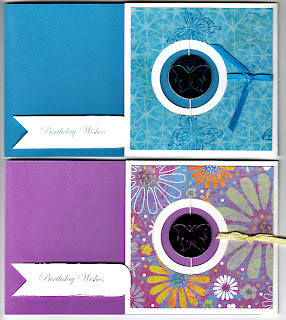 After making this snowflake card with a twist I decided to add this design to my cardmaking session for February!!  Love cards that move!!
I created it to fit in a #8 envelope by combining two pieces of cardstock that overlap in the back and create a flap on each end.  The white cardstock flap on the right hand side features the twirling element and the coloured flap on the left features the greeting and extends to the fold on the right.
The twirling element is created by capturing a piece of crochet thread between two silver circle punchies using double sided tape being sure it is centered.  I applied double sided tape above and below the punched opening, centered the twirling element in the opening and pressed the threads into the tape being sure the thread was taut.  I added another piece of double sided tape over the threads and folded the ends over and adhered them to the double sided tape, respectively.  This folding helps to ensure that the ends will remain captured and that the twirling element remains taut. Finish off the element by adhering confetti shapes to each side using double sided tape or glue dots.  I added a double knotted ribbon to the decorative paper and adhered it over the glued threads.     I trimmed my greeting and added it to the left hand side so the left flap would just tuck in slightly.  Here is a link to a video tutorial I found that was helpful.
So, to get the twirling action, you twist your element, lay it flat on your card and tuck it into your envelope.  When the recipient opens the card and lifts the flap the element twirls!!
The twirling element can be almost any size and shape so there is a lot of potential to make this card really fun!!
Enjoy!!

Therese
Posted by Therese at 8:11 am No comments: