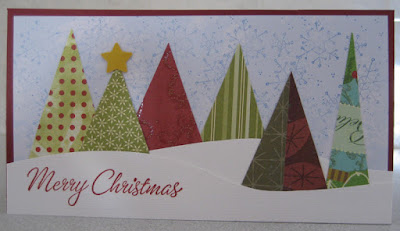 My daughter has been organizing her Christmas list and noted that she needed some Christmas cards for the kid's teachers so I put together some card kits to work on with the grand kids.
I made up cards for the #8 envelopes.  Because I cut them from letter sized cardstock I had to add a rectangle to the card fronts to make them as long as the backs which fortunately is covered by the background paper.
For this card I used a light blue floral paper which I stamped all over with a snowflake stamp in blue ink.  I glued it on my card front leaving an even border.  I stamped the greeting (SU) on a strip of 1.5" white cardstock in red ink then cut out a wavy line to create a snow bank.  I ended up using the cut off to create a second snowbank by trimming it's length and inserting in behind the first one.  I glued both ends of my first snow bank down with double sided tape to allow space in behind for tucking in my trees.  The second snow bank was just glued a bit on the bottom edge before being inserted in behind.  I auditioned all the little triangle trees and when I liked the arrangement I glued them down one at a time starting with those at the back and working my way to the front.  You can see that some of my trees are duplex which I created by gluing two leftover halves together.  The halves are the leftovers at the end of a strip of decorative paper after you have trimmed as many triangles as you can in between.  I like the collagey look of them!!  I punched a little star from yellow card stock and glued it above one of the trees using 3D foam tape.  Pretty happy with how they turned out!!  My oldest grand daughter made up a few of these in between the creation of the little felties for her teachers.
I like that this design is flexible - the background could be stamped or not, you could use as many or as few trees as you wanted, you could use one snowbank or two. Here is one my grand daughter put together.  She is long time card maker so she just did her own thing which was wonderful!!  By the end of the day I had 20 cards ready for my daughter in a variety of colour schemes - another check in the box for Christmas preparations!!  Therese 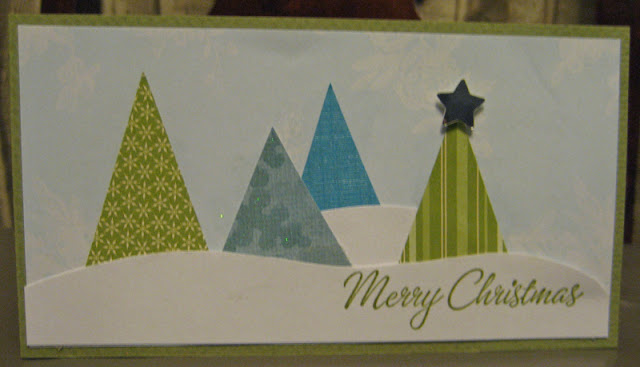 Posted by Therese at 1:51 pm No comments: