A few more cards created with beautiful used cards!!  The top two were made from one card front which I cut in half.  I used the bottom on the left hand card and added a embossed die cut of a lacy border (SU) on the top portion to hide the writing.  I added just a bit of gray watercolour to the border to tone down the white and give it a bit of dimension.  I fussy cut a little laser printed floral wreath (Melonheadz) and watercoloured it to coordinate with the border.  I added just a touch of gray watercolour to soften and shade the edge of this element as well.  I stamped a greeting in the open area and positioned the wreath to the left of it.  I glued this large element to the front of a blue card.  For my second card I used the top half of the card.  I added a length of scalloped lace across the bottom edge securing the ends to the back of the image using double sided tape.  I really wanted to add some dimension and thought maybe I could overlay the printed butterfly in the border with another.  I spotted a container of butterflies on my desk from another project and found this one that would work perfectly.  These are plastic butterfly magnets with beautiful colour and detail which I bought years ago.  I removed the magnet and trimmed the back side before adding 3D foam tape to adhere it over the printed one!! Perfect!!! 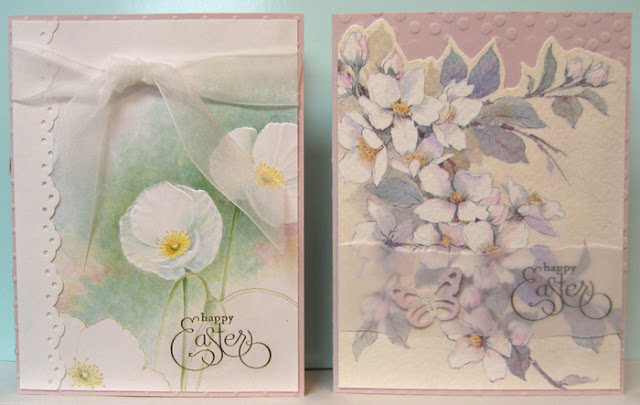 For the left hand card I used an inner flap from a large used card. You can check out the card I made with the image on the front of the card here.  I wanted to add a bit of dimension so I punched a white eyelet border (SU) and glued it to the left hand edge of the image and then added an off white organza ribbon which I doubled knotted on the front leaving the ends long.  I stamped a little greeting (SU) on the lower portion of the image and embossed it in gold.  I glued this large element to a pink card front.
For the right had card I fussy cut around the flowers from another card front and then trimmed it down to fit on my pink card.  This card front was left over from a card kit so it was embossed on the edges but that worked well for this card.  I stamped and embossed the Easter greeting onto a strip of vellum, tore both edges of the strip and then positioned it on my image then folded back both ends which I taped to the back.  I punched a butterfly from a scrap of the card front and embellished it with a bit of watercolour before stitching it to my image.   To finish off my card I glued this large element to the pink card.
Hope you will all consider reusing the cards you receive from others in fun and creative ways for making other cards!!    Four or five, nicely packaged, make a nice hostess gift or can even be a blog give away prize!!

Therese
Posted by Therese at 7:09 pm No comments: