Made some cards with photos from photos calendars!! 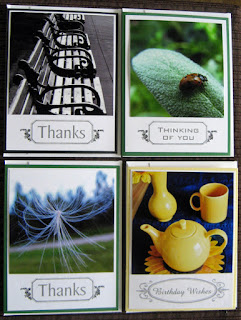 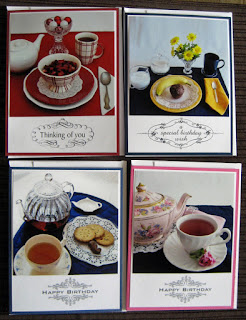 I wanted a few cards to add to my stash so I could make a nice set of cards for a gift so I decided to make a few of these simple sentiment cards with pages from photo calendars which I have received from my sister over the last few years.  I love the look of these cards because the photos make such great focal elements.  I have created a few greetings by combining frames with font greetings which I laser print on white cardstock, cut apart and then use as a layer between the photo and a coordinating card front.   You get four greeting layers from one sheet of white cardstock theses can be made up in batches fairly quickly!!  I do have to trim the photos as well because they are 4"x 4" once they are trimmed from the calendars.  These calendars featured teacups and tea pots, black and white architecture and a wide variety of nature shots!!  She has a few 2019 ones ready to go already for sales this fall.       Therese 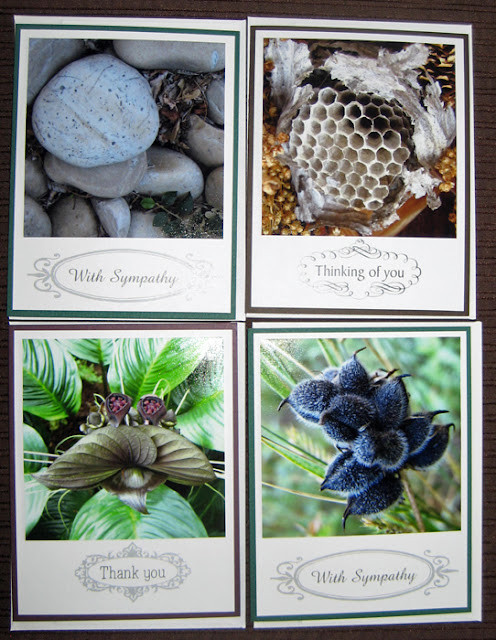 Posted by Therese at 4:31 pm No comments:

Handmade cards featuring digital greetings and images along with some sponging 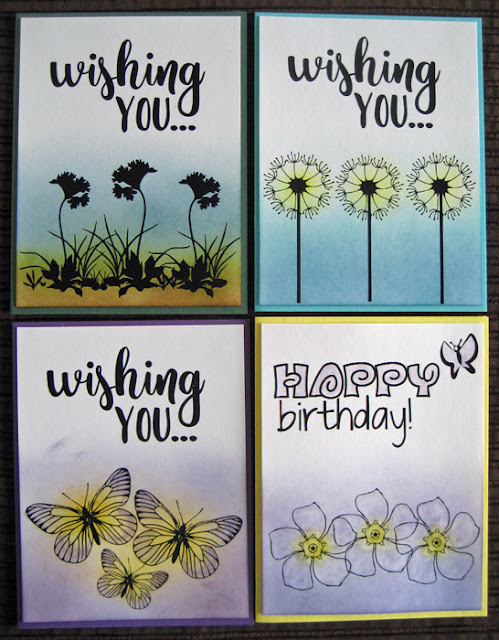 I found a card on Splitcoast Stampers that attracted me because of its large greeting so I took a bit of time to see what else was cool about it.  It was a CAS card with a large black greeting, some flowers stamped in black and some sponging on the lower portion of a white single layer card.  I really liked the look so I decided to make it my own.  I found a few fun greetings on DesertDiva's blog which worked for the greeting.  I found a good variety of images that I liked on CLKER so I combined them digitally and laser printed them onto white cardstock.  After cutting them apart I sponged the images with colours that worked with the images and then layered them onto coordinating coloured cardstock.  Love how they worked out!!!!!!!!!!!!!!!!  I like the "wishing you.. " greeting in that it can be for almost any occasion and works with quite a few images.  I did find that I watercoloured a few of them to add dimension and depth.  I added purple to the butterfly wings to define them and just water to the ink that was already there on the purple flowers which changed them enough to give them texture.  I did add purple to the greeting on that one too.  The other two were good to go with just sponging.  I generally started sponging at the bottom of the image and added as I went up decreasing the depth of colour as I went up so that it would just fade away before it got to the greeting.  I will be making more of these!!                Therese
Posted by Therese at 3:41 pm No comments: