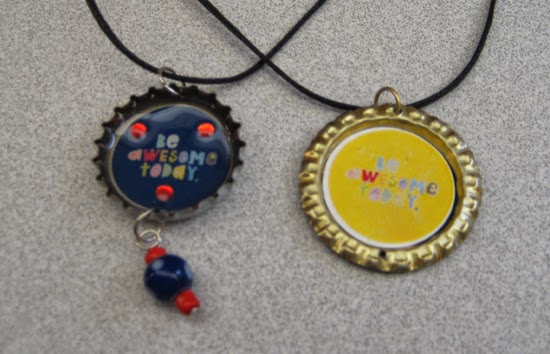 Another project we tackled when my grand daughter was visiting.  We had collected several bottle caps from an event we attended and thought we would apply some creativity and turn them into pendants.
It took a little more effort to flatten these ones as they had already been crimped onto bottles.  Read - lots of prying with pliers and hammering iwth mallets!!
We printed the sayings off of the internet, glued them into our bottle caps and added beads and bling.  For some of them we also added some clear dimensional paint (clear sun catcher paint). Once they were dry we added a string and some danglies using jump rings.  We created our own jump rings using paperclips.  You just straighten the paper clip, wrap tightly around a skewer, remove and cut down one side with wire snips - quick and inexpensive jump rings!!  She took a few home to continue to craft with.

Therese
Posted by Therese at 4:04 pm