A kid's card that features a fun alien robot 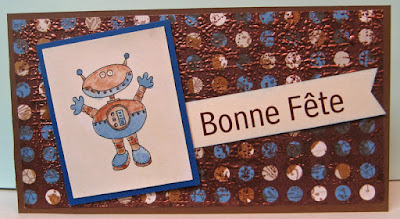 For this kid's birthday card I lengthened my front with a piece of brown cardstock the same as I had used for the card holding them together using regular tape on the front.  I added my piece of decorative paper over everything which helps keep the pieces in place.  I trimmed the image, (a cute alien robot from Dearie Dolls) watercoloured it and added some copper metallic watercolour to some of his parts so he would coordinate with the decorative paper.  I added a blue layer to my image and then adhered it to my card front using 3D foam tape.  I trimmed my laser printed greeting, flagged one end, sponged the edges with blue ink and then slipped the other end under the image and adhering the flagged end with double sided tape.  It was fun to change the orientation on this card.

Therese
Posted by Therese at 3:01 pm