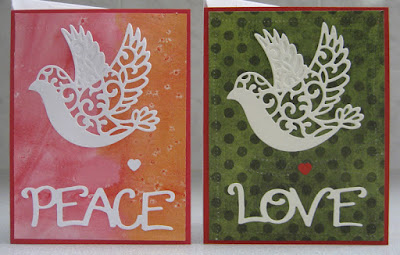 A few more of the cards we made at the first class with the die cut doves and words.  The others are here.  I used a thin metal die with a metal plate to cut the doves and placed wax paper between the paper and the die to hasten the cleaning of the die after cutting.  Works very well!!
The words were cut from the same cardstock from a long Sizzlets die with "Love, Peace Joy" on it.  I punched the little hearts from the same paper.  After gluing the doves and words in place I ran a pattern tracing wheel (sewing) around and between them to add a bit of texture to the background before gluing this large element to the front of a coordinating card.  I glued the little heart between the two elements.  I used a red on one of them and might have done more of those had I thought of it earlier.  I really love these cards!!  Therese