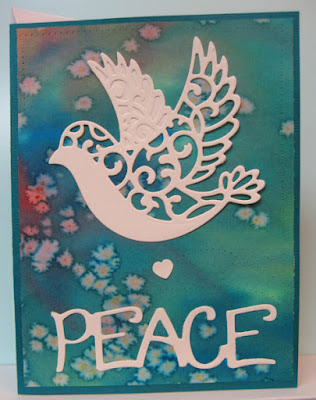 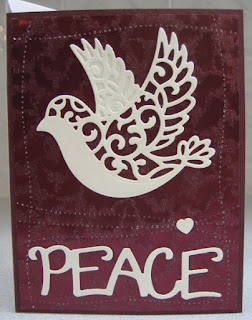 For my second card I wanted to use this beautiful dove die from Spellbinders.  I have had it for a while but have not really used it a lot.  I bought it because it is such a versatile image and certainly would make great Christmas cards.
So I cut out doves from white cardstock and then cut the PEACE (SX) word from the same cardstock using only the one word from this long Sizzlit die (peace, love, joy).  Next, I went looking for backgrounds that would be suitable for these doves.  I found some hand decorated paper I made a while back when I sister was visiting which really worked well.  We had used watercolours and added salt which creates the starburst which simulate stars or snowflakes depending on how you look at it!!  Once my backgrounds were trimmed out I cut coordinating card fronts.  When it came time to combine the doves with the background papers I found that some backgrounds would be best with ivory accents so I cut a few ivory doves and words to go with those backgrounds.
I started assembling my card by gluing my dove to the top portion of my background and then adding the word PEACE to the bottom portion.  I used a fine tip glue applicator for the words which kept the glue where it was supposed to be.  The layout looked a bit sparse but I was really not wanting to detract from the main elements too much so I added some wavy lines with my pattern tracing wheel.  That was much better! Still needed something - I decided to add a small heart at an intersecting point of the lines between my dove and the word.  That was perfect!!
My second card features some burgundy holly gift wrap as a background which works very well too!
Love the simplicity of this card with those beautiful elements which pretty much stand on their own!!